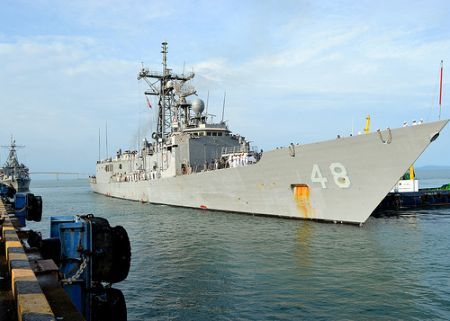 USS Vandegrift (FFG 48) and U.S. Coast Guard Law Enforcement Detachment (LEDET), in support of Operation Martillo, recovered approximately 1,100 pounds of cocaine found adrift in the Pacific Ocean on October 27 in connection with illegal drug smuggling while on patrol off the coast of Central America.

The debris field was identified by the on-board LEDET team as possible weighted down cocaine bales.

The 11th Coast Guard District directed Vandegrift to deploy its joint Coast Guard LEDET/Navy Visit Board Search and Seizure (VBSS) boat crew to further identify and search the field. Upon arriving, the LEDET discovered approximately 13 large bales in the water.

“Our success on this mission is a direct result of the exceptional team that we have here on Vandegrift,” said Cmdr. Daryl Robbin, executive officer of Vandegrift. “Vandegrift’s Sailors, air department, and LEDET have shown great pride and dedication to their work and have become a highly-effective team. I could not be more proud of their performance.”

This interception brings Vandegrift’s total amount of disrupted cocaine shipments to an approximate 9,800 pounds of cocaine off the coast of Central America.

Vandegrift is currently deployed to the 4th Fleet area of operations in support of Operation Martillo, which began in January 2012.