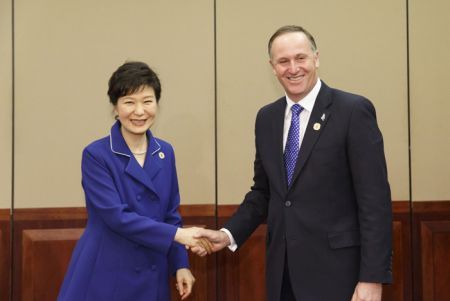 After initialing the FTA, Korea and New Zealand intend to officially sign the deal early next year. It will go into effect as soon as the legislatures of the two nations ratify the deal.

New Zealand will lift tariffs on 92 percent of imports from Korea, in terms of their value, and it will further eliminate duties on 7,288 Korean products over the following seven years.

However, 194, or 12.9 percent, of the approximate 1,500 farms goods produced in New Zealand, including rice, honey, apples, pears, persimmons and squid, are excluded from the tariff cut.

In addition to a reduction of tariffs on goods, the two nations agreed to open the public procurement market and the services sectors, and allow more liberalized investment opportunities. They also agreed to adopt an investor-state dispute settlement process and increase the number of working holiday visas from the current 1,800 to 3,000 per annum for Korean youths. The agreement also includes issuing 200 professional visas per year.

“This FTA has been signed with one of New Zealand’s biggest trading partners. Korea is New Zealand’s sixth largest export destination for goods and services. Korea is New Zealand’s eighth largest source of imports. Two-way trade between the two countries was worth USD 4 billion in the year ending June 2014. This free trade agreement will put New Zealand exporters back on a level playing field with competitors from Korea’s other FTA partners, such as the U.S., Chile and the EU. I can say that what is not included in Korea’s FTAs already signed with the EU, the U.S., Australia and Canada is also not included in the Korea-New Zealand FTA. Thus, there will be no need for further adjustments in the long-term process of gradual liberalization. It is a win-win for both Korea and New Zealand,” said New Zealand Prime Minister John Key.

The deal has been reached five years and five months after the first negotiations started in June 2009. With this deal, Korea has now sealed FTAs with 31 out of 34 of the other Organization for Economic Co-operation and Development (OECD) nations. Only Japan, Mexico and Israel remain.