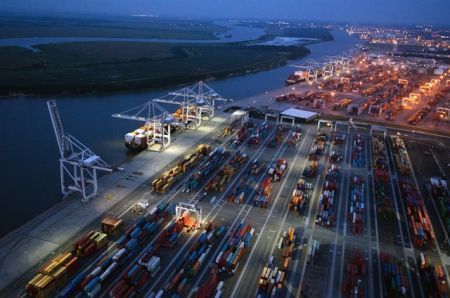 The Georgia Ports Authority said yesterday that its terminals in Brunswick and Savannah moved a combined 2.79 million tons of freight in October, a record for the authority.

Savannah’s Garden City Terminal handled a record 311,759 twenty-foot equivalent container units (TEUs) in October – a 13.6 percent increase (37,432 TEUs) compared to the same month a year ago. For the fiscal year to date, the GPA has moved 1.2 million TEUs, an increase of 13.1 percent, or 138,554 TEUs, over the same period last year.

“Strong growth across all key sectors of our business is an indication that our ports are reaching a larger and more diverse customer base,” said GPA Executive Director Curtis Foltz.

Other records set in October include the highest number of truck gate moves at Garden City Terminal (213,445), and the most containers moved via intermodal rail (31,238), the port Authority added.

“In order to accommodate continued growth, we are taking proactive steps to increase our capacity from 4.5 million TEUs per year to 6.5 million,”  GPA Board Chairman James Walters pointed out.

At Monday’s board meeting, the GPA approved construction of Gate 8, a USD 10.2 million project that will serve as the third major truck interchange at Garden City Terminal.

The port Authority said that infrastructure design and planning for the new gate are currently in final draft. The project is expected to be completed by the end of 2015.