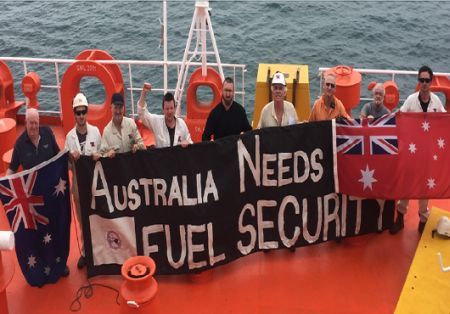 The Australian crew of the product tanker Tandara Spirit decided yesterday to end their sit-in and to sail the vessel from Port Phillip Bay, the crew said in an open letter published by the Maritime Union of Australia (MUA).

The Tandara Spirit’s crew were told three weeks ago that they will be made redundant and replaced with foreign workers once the ship docks in Singapore. The protest  of the crew was further fueled by the announced removal of the fuel tanker, owned by Teekay and operated by Viva Energy Australia, from trade.

“Our 20-day action was forced upon us. It has put us under extreme stress. The threat of destructive legal action against us has been of deep concern. We don’t want our wives and families to be worried about losing the family home.

“We are ordinary working people. We’re not trying to be political activists. We just want to do our jobs in Australian waters. So although we are ending our sit in for now, our conviction that we are doing the right thing – both for ourselves and for the nation – is unbent,” the letter reads.

The crew have been defying orders from Teekay and Viva Energy to sail the Tandara Spirit back to Singapore for 20 days.

With the closure of Caltex’s Kurnell refinery and Shell’s Clyde refinery in Sydney and planned closures by BP in Brisbane, Australia now imports 91 per cent of its petroleum products by foreign tankers – up from 60 per cent in 2000.

With Viva’s removal of the Tandara Spirit, there are now only 4 MUA–crewed tankers that operate domestically. BP is also threatening to remove the Australian crew from the British Loyalty in mid-2015, according to MUA.

There are over 100 international tankers that import refined products to Australia and that number will rise.

“There are more than 500 seafarers currently out of work so the chances of picking up another job are low. Seafarers working this vessel have been at sea for 20, 30, 40 years and it’s a disgrace that Vitol/Viva want to replace us with workers earning $20 a day.”

As explained by MUA, Vitol and Viva appear to be chartering ships of a poor standard into the Geelong refinery to replace the Tandara Spirit, citing as examples: