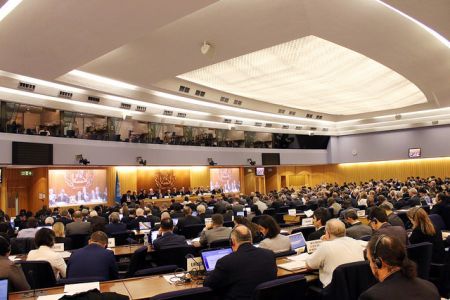 IMO’s Maritime Safety Committee approved, in principle, the draft International Code of Safety for Ships using Gases or other Low-flashpoint Fuels (IGF Code), and also approved proposed amendments to make the Code mandatory under Safety of Life at Sea (SOLAS), with plans to adopt both at the next MSC session scheduled for June 2015.

The IGF Code will provide mandatory provisions for the arrangement, installation, control and monitoring of machinery, equipment and systems using low-flashpoint fuels, focusing initially on liquefied natural gas (LNG), to minimize the risk to the ship, its crew and the environment, having regard to the nature of the fuels involved.

The Code addresses all areas that need special consideration for the usage of low-flashpoint fuels, based on a goal-based approach, with goals and functional requirements specified for each section forming the basis for the design, construction and operation of ships using this type of fuel.

The MSC also adopted the Polar Code and related amendments to the International Convention for the Safety of Life at Sea SOLAS to make it mandatory; continued its work on its action plan on passenger ship safety; and approved and adopted a number of items put forward by the sub-committees.