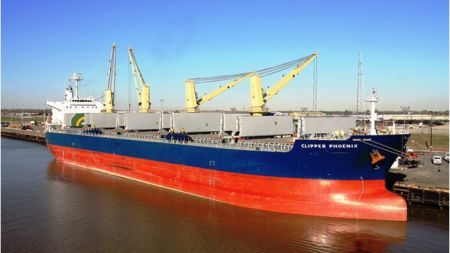 The new pool will commence operation immediately, with 16 vessels initially committed to join in early 2015, of which Genco has committed 50% of the ships and Clipper the balance.

”We are pleased to continue to grow our pool management business which now carries a 20 year track record of performance,” said Gary Vogel, Partner and CEO of Clipper Group. ”We are strong advocates of pooling, not only from a manager’s perspective, but from that of an owner, as we directly reap the benefits of efficiencies and economies of scale alongside the other pool members.”

Under Genco’s agreement with Clipper, the Genco Pyrenees was the first vessel to deliver into the Sapphire Pool in early January, with other vessels scheduled to follow soon after.

Clipper is also in discussions to establish an additional Ultramax Pool specifically focused on New 63,000+ deadweight vessels, of which Clipper currently operates eight, including the two largest Ultramax vessels; the Clipper Excalibur and Clipper Excelsior (66,000 dwt).