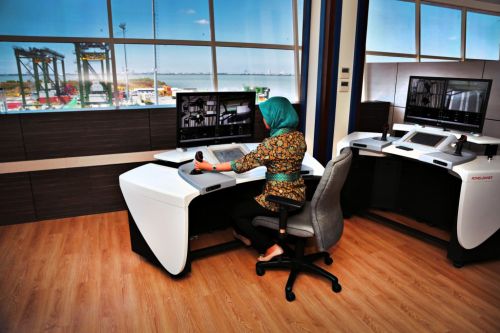 The Lamong Bay is the first green-concept container terminal in the country, and will increase the port’s annual capacity from 1.5 million to 3.5 million TEUs. Once fully operational, the total capacity of this bay terminal will be 5.5 million TEUs.

The container handling system at the port is fully automated and it consists of 20 Automated Stacking Cranes (ASCs), Remote Operating Stations (ROSs), and associated container yard infrastructure, provided by Konecranes.

”Lamong Bay Terminal is the next generation container terminal. Thanks to the reliability, productivity, predictability and safety provided by our Konecranes automated container handling system, we will provide our shipping line customers with uninterrupted, reliable container flow. This will be the key to build up business success in Indonesia and South-East Asia,” said Mr. Prasetyadi, Project Manager, Pelindo III.

The government of Indonesia has introduced a nationwide freight transport program to improve the movement of goods through the country’s vast waterways. The Lamong Bay Terminal is one of the key projects within the program which also includes the construction of 170 sea ports, mostly for pilot boat stop overs, and building of nine container ships.