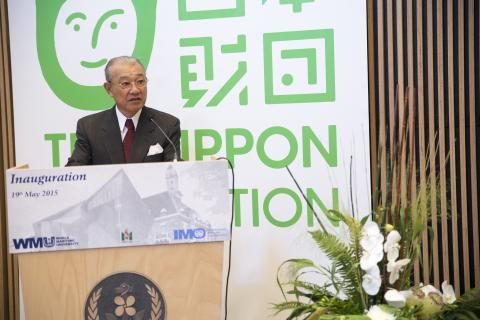 The Nippon Foundation, a Japanese philanthropic organization that promotes social innovation, said it is willing to establish the fund to support expansive and innovative activities at the Malmo-based postgraduate maritime university founded by the International Maritime Organization (IMO) in 1983.

Speaking at the inauguration of a new campus for the WMU on Tuesday, May 19, Sasakawa said the fund would be established to support the university to establish itself as ”an ocean and maritime research institution engaged in multi-disciplinary scientific research in the marine field, and an educational institution that generates human resources who have the capacity to address ocean issues with a multi-disciplinary approach.”

‘‘Mr Sasakawa’s vision for WMU is completely in line with the eight strategic directions recently adopted by the WMU Board of Governors,” said Koji Sekimizu, Secretary-General of the IMO and Chancellor of WMU.

”The oceans and the shipping industry, both so vital to the future of mankind, must have leaders that are very well versed in ocean policy matters and can take a global view of the oceans and shipping. WMU will provide those leaders, and the pledge made by the Nippon Foundation today is a major step forward in achieving the expansive and innovative strategic directions adopted by the Board of Governors.”