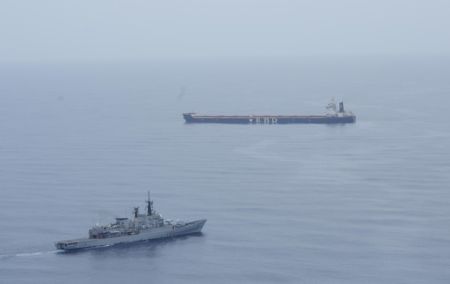 An Italian-flagged merchant vessel MV Roberto Rizzo received much needed help from an Italian navy ship ITS Libeccio after it became adrift 55 nautical miles off the coast of Somalia, on Thursday, 18 June.

MV Roberto Rizzo had been en route to China when it issued a distress call, after developing serious engine problems.

Its close proximity to the coast made it vulnerable to potential pirate attack, the statement from the EURNAVFOR said.

As ITS Libeccio’s helicopter hovered overhead while Italian Navy engineers carried out repairs on the stricken engine.

”I wish to express my sincere gratitude to the crew of ITS Libeccio for their timely assistance,’‘ the master of MV Roberto Rizzo, Nicolae Anthofie, said.