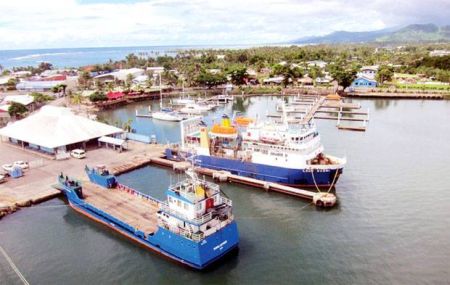 Japan has set aside a JPY 3.4 billion (USD 28.3 million) grant-in-aid to improve safety at the only commercial port on the Pacific island state of Samoa – Apia Port.

Starting in January 2016, Apia Port will undergo a port safety enhancement project consisting of the rehabilitation of its aids to navigation, upgrades to berthing and docking facilities, and the rehabilitation of the container terminal yard. The project is scheduled to be completed by September 2017.

Apia Port handles about 97% of all foreign trade cargoes for the country and is regarded as the lifeline of the country with its lifelihood largely depending upon import and the rest on transportation by sea.

Apia Port is connected with South Pacific countries such as New Zealand and Australia, Far East including Japan, United States and Europe, mostly through container and Ro-Ro ships.

The main wharf of Apia Port was constructed in 1966 for conventional cargo handling purposes with the provision of full scale port functions such as a 12m deep and 185m long berth.

The new wharf extension (166m) was commissioned in November 2003.