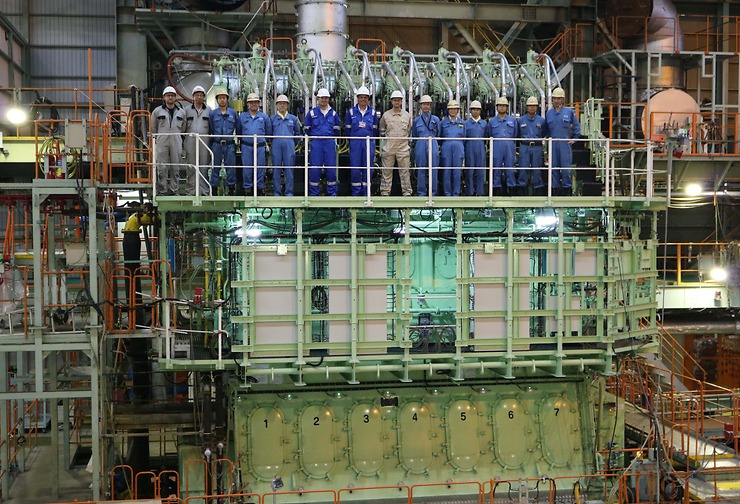 Mitsui Engineering & Shipbuilding Co., Ltd. (MES) announced on 29 June that they have completed the world’s first ME-GIE ethane-operated two-stroke diesel engine. The engines will be for propulsion of three ethylene carriers, which primarily will carry liquid ethane as cargo.

The Mitsui-MAN B&W 7G50ME-C9.5-GIE is the third engine in a series of three for installation in three LEG (liquefied ethylene gas) carriers of 36,000 m3 for Hartmann Schiffahrt of Germany and Ocean Yield of Norway, being built at Sinopacific Offshore Engineering (SOE) in China.

MAN Diesel & Turbo reports that ethane was chosen as fuel, in preference to HFO, due to its more competitive pricing. As a fuel, its emissions profile is similar to methane and contains negligible sulphur and comparatively lower CO2. MAN Diesel & Turbo also verified methane operation on this engine type and states that the ME-GI engines will be set up such that they can easily be converted to run on methane as an alternative, as per the owner’s wish.

The ME-GI engine represents the culmination of many years’ work and gives shipowners and operators the option of utilising fuel or gas depending on relative price and availability, as well as environmental considerations. The ME-GI uses high-pressure gas injection that allows it to maintain the numerous positive attributes of MAN B&W low-speed engines that have made them the default choice of the maritime community. MAN Diesel & Turbo sees significant opportunities arising for gas-fuelled tonnage as fuel prices rise and modern exhaust-emission limits tighten. Indeed, research indicates that the ME-GI engine delivers significant reductions in CO2, NOx and SOx emissions. Furthermore, the ME-GI engine’s negligible fuel slip makes it the most environmentally friendly technology available. As such, the ME-GI engine represents a highly efficient, flexible, propulsion-plant solution. An ME-LGI counterpart that uses LPG, methanol and other liquid gasses is also available, and has already entered service operating on methane.

Ethylene carriers are generally considered the most sophisticated of all gas tankers and are capable of carrying most liquefied gas cargoes, but also ethylene at its atmospheric boiling point of −104°C. These vessels have insulated 5% nickel-steel cargo tanks and can accommodate most liquefied gas cargoes up to a maximum specific gravity of 1.8 at temperatures ranging from −104°C to +80°C at a maximum tank pressure of 4 bar.

While ME-GI engines have been designed for use by methane, operation on ethane is a new development. After methane, ethane is the second-largest component of natural gas with a content that varies from < 1% to > 6% by volume. However, before natural gas can be used as a commercial fuel, it must be processed to remove impurities, including ethane. Like many hydrocarbons, ethane is isolated on an industrial scale from natural gas, usually by liquefaction at cryogenic temperatures. Its chief use is within ethylene production.

Hartmann Schiffahrt is a ship-management company based in the northern German city of Leer. Founded in 1981, it manages the technical and economic aspects of its own and other fleets with a focus on the gas and container segments and is a world leader within the gas-tanker segment. The company is part of Hartmann AG that has diverse interests in the maritime transport and logistics sector such as dry bulk, product tankers, multi-purpose vessels and OSVs.

Ocean Yield is a Norwegian shipowner with investments within oil-service and industrial shipping. The company focuses on modern assets with long-term charters to solid counterparties. The company's asset base consists of six offshore vessels, six Pure Car Truck Carriers (PCTC) of which three newbuildings, and three newbuilding Liquefied Ethylene Gas carriers (LEG), all with long term charters. Ocean Yield was established in March 2012 and was listed on the Oslo Stock Exchange in July 2013.