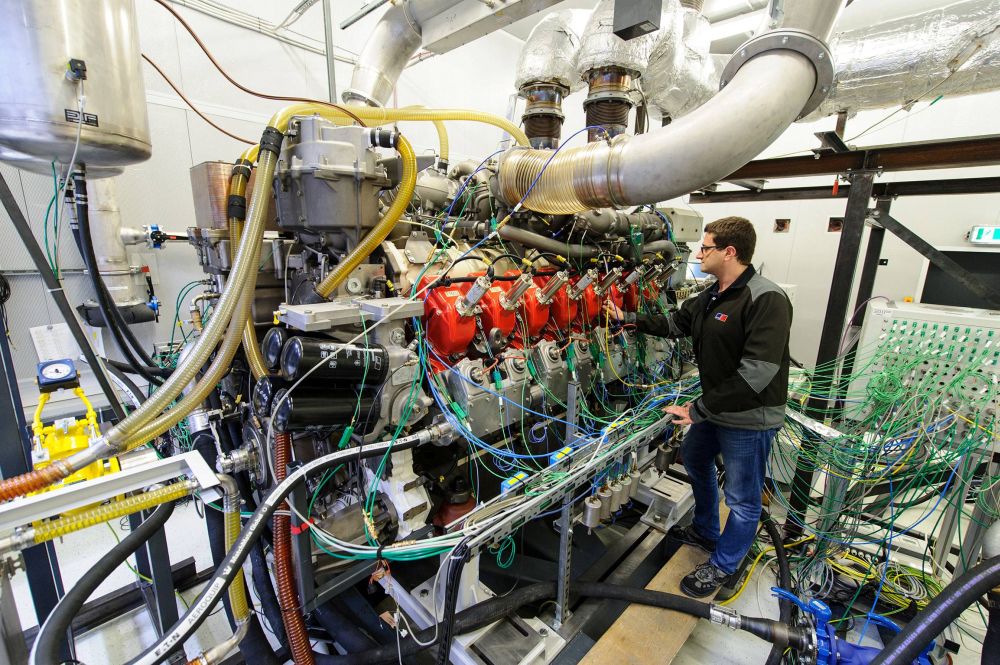 The 16-cylinder gas engine will cover a power range from 1,500kW to 2,000kW and will be based on MTU’s proven 16V 4000 M63 diesel engine for workboats. As of the end of 2017, the first series engines will be used to power a tug built by Damen Shipyards Group for towage and salvage company Svitzer.

The two companies are collaborating with MTU to put into service the world’s first tug powered by high speed gas engines. The tug is to feature high performance as well as reduced fuel costs and emissions. Because of their dynamic acceleration behaviour, their low environmental impact, their reliability and their economy, the new MTU gas engines are ideally suited to tugboats, ferries, push boats and special purpose vessels such as research vessels.

Chiel de Leeuw, Damen sales manager for Europe said: “Damen is very proud to be building this vessel in co-operation with MTU and Svitzer. It will offer a package combining fast acceleration, manoeuvrability and extreme efficiency.”

André de Bie, Damen design and proposal engineer for tugs, said: “The level of co-operation and knowledge sharing in the development of this tug ensures a vessel that is capable of a very robust performance. The natural gas propulsion is not only efficient, clean and easy to maintain, it also represents optimal safety. The reverse stern drive concept offers a highly effective, ship-assisting vessel which, thanks to the Twin Fin propulsion, is delivered in a very compact, manoeuvrable package.”

When the collaboration between the three companies was originally announced in 2014, Ulrich Dohle, chief executive of Rolls-Royce Power Systems, said: “We are developing our new gas series in order to meet the extreme load profile of the tugboat. The acceleration will be comparable to the level of our diesel engines. Due to the clean combustion concept, compliance with IMO Tier III emissions legislation will be ensured without the need of additional exhaust gas after treatment. The 2,000kW MTU gas engine is characterised by high power density combined with low fuel consumption.”

Explaining why Svitzer has decided to invest in such a unique vessel, chief technical officer Kristian Brauner said: “As a major harbour towage operator an important consideration is that this tug will realise a considerable reduction in fuel costs. Obviously fuel is a major cost concern for all operators. And, crucially, as a market leader it is important for us to stay innovative with regard to carrying out safe and eco-friendly operations and reducing emissions.

“Through the years we have already developed one version of the ECOtug, and the choice to develop the new CNG [compressed natural gas] tug is a natural step, in order to remain an eco-conscious towage company.”

Speaking in July this year, Dr Dohle said: “We can now confirm that the engine meets both our requirements and those of our customers. Its performance and its acceleration behaviour are similar to the excellent characteristics of a diesel engine. It is economical, reliable and clean.” Rolls-Royce will start delivering the first certified series production gas engines for commercial vessels in 2018.

Dr Dohle continued: “We are convinced that gas engines will become increasingly important as supplements to our proven diesel engines for marine applications. Natural gas is an important fuel of the future. It will be available longer, it is cheaper to obtain in many regions of the world, and it has a better environmental footprint than heavy oil or diesel.”

Future emissions regulations will demand propulsion systems than are even more environmentally friendly than those that are currently available. In the case of gas engines, health threatening substances in the exhaust gas have been reduced by 80-100 per cent compared with diesel engines, and greenhouse gases by up to 11 per cent. The new MTU gas engine will meet the IMO Tier III emissions standards that have been in force since the beginning of this year, with no additional exhaust gas treatment required.

The gas engine portfolio will initially be supplemented by an 8-cylinder engine, which is to be available on the market with a power range of 750kW to 1,000kW. As of 2019, this MTU gas engine will provide the propulsion for a new Lake Constance ferry, operated by the local public utility company Stadtwerke Konstanz, which will ply the route between the two Lake Constance towns of Konstanz and Meersburg. The new ferry will be one of the first in Europe to be powered by a high speed pure gas engine. It is to feature low emissions and improved economy while delivering the customary high performance.

Fuel consumption, emissions, safety and acceleration are the focus of the development work. The new MTU gas engines will be equipped with a multipoint gas injection system, a dynamic motor management system and an advanced turbocharger. The multipoint gas injection system is designed to provide the engine’s dynamic acceleration behaviour, increased performance and reduced emissions. The competition concept ensures that the IMO Tier III emissions standards are met without the need for additional exhaust gas treatment. Controlled combustion ensures that fuel is used efficiently.

The safety concept, which has been optimised for gas operation, includes double-walled gas supply lines, which means that no additional complex safety precautions are required in the engineroom. On the test bench it was possible to simulate real-life manoeuvres, which represented the dynamic acceleration behaviour of a diesel engine. A statement from MTU said: “The successfully completed 3,000 hours on the test bench demonstrate that the gas engine leaves nothing to be desired in terms of the customary reliability of a proven MTU Series 4000 diesel engine.”

In its development of the new gas marine engine, MTU has benefitted from the 30 years’ experience it has gained from stationary gas engines for power generation, and the experience available within the Rolls-Royce group which has equipped ferries with medium speed pure gas propulsion systems for some 10 years now.