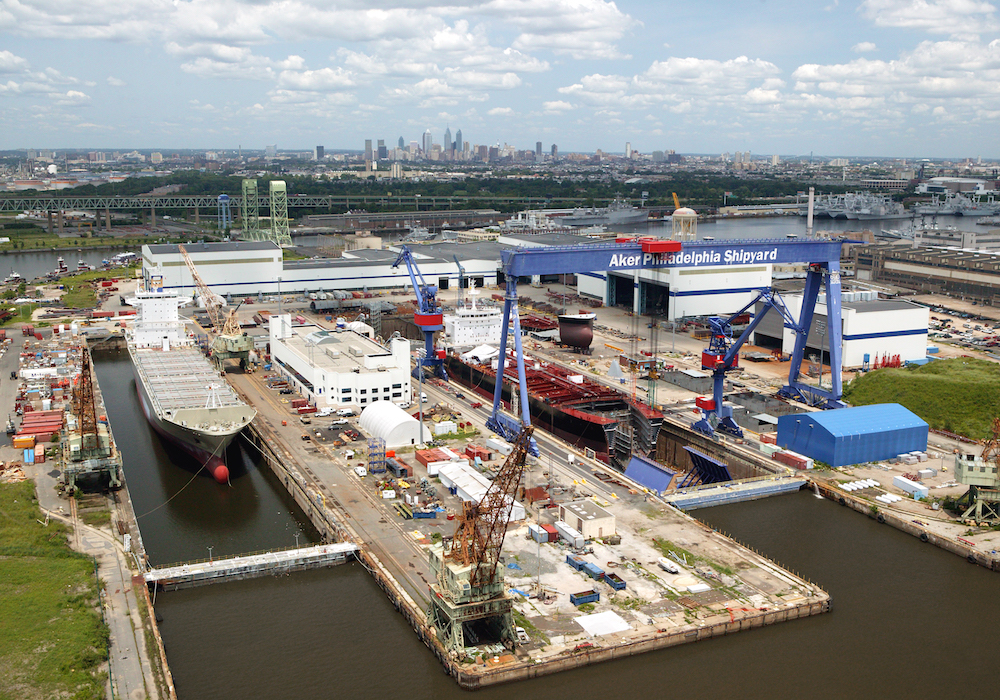 Jones Act shipbuilder Philly Shipyard, Inc. (PSI), a wholly-owned subsidiary of Oslo-listed Philly Shipyard ASA (PHLY), says it has initiated construction of up to four new containerships to operate between the U.S. mainland and Hawaii as part of new liner service it intends to form.

PSI says the cost-effective and environmentally-friendly containerships are scheduled for delivery in 2020 and 2021 and that it is “actively promoting” the formation of a new entrant into the Jones Act-qualifying containership trade between the U.S. mainland and Hawaii to operate the vessels. Currently the trade route is serviced by only two carriers – Matson and Pasha Hawaii – and is “reliant in part on a group of near end-of-life steamships,” PSI said in a press release.

The new containerships will be based on a similar design as the two 3,600 TEU Aloha-class vessels PSI is building for Matson.

Philly Shipyard, fomerly Aker Philadelphia Shipyard, has a track record of promoting the formation of new shipowners in the Jones Act market, as was the case with American Shipping Company and Philly Tankers.

“PSI is presently engaged in advanced discussions with a major U.S. shipping operator about establishing a new, financially strong carrier with a fleet of modern vessels to be built by PSI to support commerce between the U.S. West Coast and Hawaii. Several prominent investors and lenders in the U.S. shipping market have expressed interest in taking part in this opportunity. In addition, a highly regarded maritime leasing company has issued an indicative offer with preliminary terms for a bareboat charter structure,” the press release said.

To help with the formation the new carrier, PSI says it has retained former senior U.S. shipping executives including John Keenan, who held various executive roles at defunct shipping company Horizon Lines, including as President and Chief Operating Officer from 2007-2011.

“We are excited to get started on building a new fleet of containerships for a new carrier in the Hawaii trade and are pleased to have received such positive feedback from well-known U.S. marine players and financing sources,” said Steinar Nerbovik, Philly Shipyard’s President & CEO. “Philly Shipyard has a strong track-record of building quality vessels for this trade, and we believe local communities can benefit greatly from the safe and reliable service provided by our modern, efficient and ‘green’ ships.”

With strict MARPOL/ECA emissions regulations set to take effect in 2020, PSI says several of the remaining steam-powered vessels serving the Hawaii trade route today will be out of compliance without substantial and costly modifications. Even if these aging steamships are modified, PSI says, they would be less reliable and carry significantly higher operating costs than newer vessels.

“PSI believes these circumstances create a unique opportunity for a new Jones Act carrier to enter the Hawaii containership trade with a fleet of cost-efficient and eco-friendly container vessels built by PSI. Furthermore, unless these new ships enter the Hawaii trade route starting in 2020, local commerce may be adversely impacted by the new emissions standards,” the company said.

PSI has already begun construction of the new fleet, including commencing design work and procurement activities. The company says the vessels are being designed to address the market trend toward larger-sized containers, faster transit times and LNG fuel. “PSI has initiated placing orders and making financial commitments on long-lead items,” the company said.

The containerships have planned delivery dates in 2020 for the first two and 2021 for the second two.

PSI added that these new containerships will be a direct continuation of two similar 3,600 TEU Aloha-class containerships which it is constructing for Matson, Inc. for the Hawaii containership trade. Deliveries of those ships are planned in 2018 and 2019. “PSI believes that the operational benefits offered by series production with familiar ships, coupled with its historical access to vessel financing, places PSI in an advantageous position to build vessels for a new cargo liner service between the U.S. mainland and Hawaii,” PSI added.