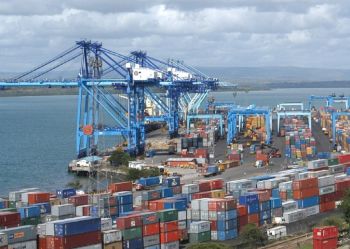 After a long wait, the port of Mombasa will be dredged of mud and silt to finally accommodate bigger ships — as size continues to rule the marine industry. Having lost some trans-shipment business to the port of Dar-es-Salaam in Tanzania, the Kenyan port is playing catch-up with the Kenya Ports Authority managing director Gichiri Ndua’s announcement Wednesday that the dredging would start this month and be completed in 18 months. Initially, ships with a longer draft were forced to remain in the high seas waiting for a high tide and at the expense of merchants who turned to Dar-es-Salaam — a massive natural port with minimal vessel delays.
Mr Ndua told a Press briefing that the construction of an new cargo berth No. 19 will start at the same time.
The two projects funded by the Government are estimated to cost more than Sh10 billion. Dredging alone will take Sh5.2 billion. The port is being prepared to accommodate bigger ships after losing major trans-shipment business to Dar. It will be dug to a depth of 15 metres while the container berths will be 12.5 metres. Mr Ndua said the two projects were expected to address the perennial problem of congestion. However, Maersk Line, a major operator, asked the port management to go beyond congestion and focus on growth.
“Container vessels are getting ever larger and it is important for East African ports to keep investing and expanding to accommodate larger vessels for better economies. Invest not only to avoid congestion but also to prepare for the future of container shipping,” the managing director of the Maersk Line (K) Ltd Rolf Nielsen said.
One of the dredging machines is already at the port as Van Oord Dredging and Marine Contractors of Netherlands, who won the multi-million shilling tender, prepares to start work. China Roads and Bridge Corporation will construct berth 19.
Mombasa has had a perennial problem with its berths where none was developed since 1980.
The existing berths were designed to accommodate ships 180 metres long but most of the ships calling at the port today measure 230 metres. The three container berths have a total length of 600 metres. They are being extended to 760m, Mr Ndua said, to accommodate three vessels each of length 235 metres and leave a 15 metres safety allowance.
Maersk Line, with the largest market share at Mombasa port, has ordered a Triple-E vessel with a capacity of 18,000 Twenty Foot Equivalent Units (Teus) to be delivered in 2013, Mr Nielsen said.
Shipping lines have threatened to impose charges on imports due to the delays where it takes some ships more than 10 days to offload. The Kenya Ship Agents Association has petitioned KPA, asking the authority to address delays, the executive officer Mr Juma Tellah said. Ships have to rely on the general cargo berths to offload, he said. At the general cargo berths, 6.5 containers are offloaded per hour, which is far below the KPA target of 25 containers per hour.
By GITHUA KIHARA (businessdailyafrica)