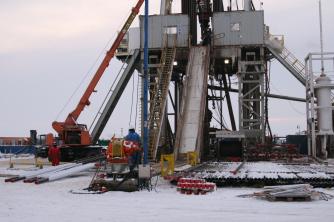 UK-listed junior Aurelian Oil & Gas is looking to expand resource potential with a new well to be drilled this summer on its Siekierki tight gas project in Poland.
Steve Marshall 15 June 2011 08:49 GMT
The Krzesinki-1 appraisal, set to be spudded in early July, could add “significant volumes” to the existing contingent gas resource estimate for the Greater Siekierki play of 346 billion cubic feet, net to Aurelian, according to chief executive Rowen Bainbridge.

The well location in the south-west part of the Siekierki reservoir lies on trend with a series of producing fields with better permeability than the main tight gas project.

It is the fourth probe in Aurelian’s appraisal programme on the shale play and is targeting net resources of 44 Bcf with an upside of 465 Bcf. Target depth of 4150 metres is expected to be reached early in the fourth quarter.

Trzek-3, which is targeting a separate high in the Siekierki structure with a recoverable resource estimated at between 16 Bcf and 28 Bcf, has completed drilling its horizontal section, and a cemented liner has been set in preparation for fraccing in July and August, the company said in a statement.

Gas shows were indicated throughout the 1060-metre horizontal section, it added. The well follows the earlier Trzek-2 probe – the first of its kind in Poland - where drilling started in February.

The Siekierki project is located on the Poznan licences, which are operated by Aurelian with a 90% stake held through local subsidiary Energia Zachod, with Avobone on 10%.

Elsewhere in Poland, Aurelian reported that the first well to be drilled on the Bieszczady licence, in which it holds a 25% stake, has started producing oil and gas from a fourth drill stem test.