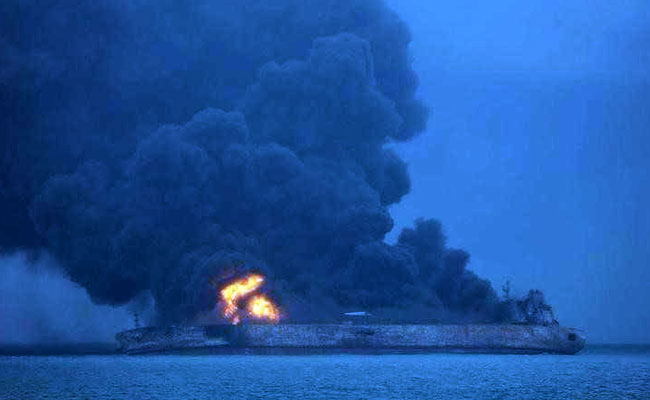 The missing – 30 Iranians and two Bangladeshis – were all from the Iranian tanker Sanchi, which was carrying 136,000 tonnes of oil condensate. It spilled oil and was floating while still on fire early on Sunday.

The other vessel, the Hong Kong-registered freighter CF Crystal, had been damaged but “without jeopardising the safety of the ship” and all of its 21 Chinese crew had been rescued, China’s transport ministry said.

The Panamanian-flagged 274m long Sanchi was operated by Iran’s Glory Shipping and was heading to South Korea with its cargo, the ministry said. The accident occurred about 160 nautical miles east of Shanghai.

An oil tanker has collided with a cargo ship off China's east coast, causing an oil spill and setting the tanker ablaze. China and South Korea have mounted a search-and-rescue operation to find the 32 people – 30 Iranians and two Bangladeshis – reported missing Oil tanker on fire and 32 crew missing after collision off China's coast
Source: The Guardian