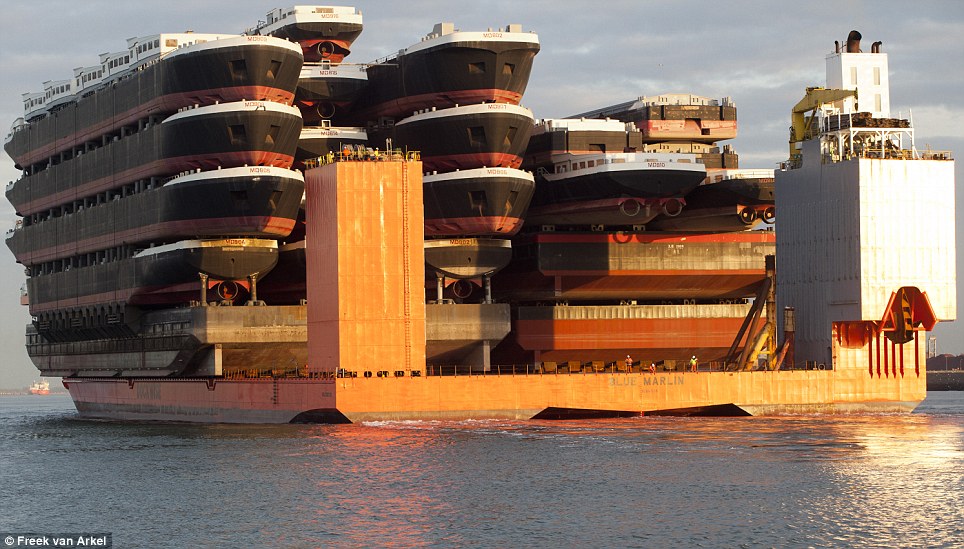 When you need to transport 22 barges – each weighing nearly 3,000 tonnes – half way around the world, you're going to need a pretty sturdy boat.

And they don't get much sturdier than the Blue Marlin, one of the most extraordinary crafts ever to sail the seas.

The incredible ship can carry 75,000 tonnes. Rather than the usual cargo of toys, TVs and coffee, it carries other ships and oil rigs.

When the US Navy needed to give their stricken destroyer USS Cole a lift home, they called on the Blue Marlin.

And when the Australian Navy wanted an aircraft carrier brought from Spain, only the semi-submersible heavy lift ship would do.

The Blue Marlin's  dimensions are eye watering. It is 712 ft long and 138ft deep – and has a deck the size of two football pitches.

It reaches a sedate top speed of 13 knots, powered by a gigantic 17,000 horse power diesel engines, with a crew of 24.

Steering it is said to be like controlling a floating office block.

The barges pictured above – which weigh a total of 60,000 tonnes - were exported from Korea to be completed in Rotterdam.