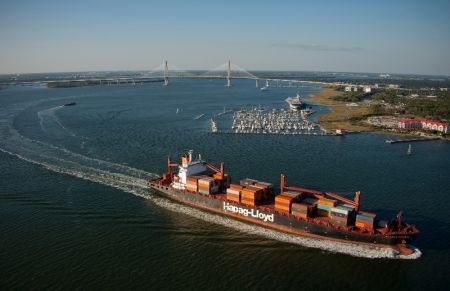 The G6 consortium of ocean carriers has recently added the Port of Charleston to a major US East Coast/North Europe service, further increasing the frequency of weekly post-Panamax vessel calls to the port, according to South Carolina Ports Authority (SCPA).

Beginning in late November, Charleston will be the final East Coast port of call for ships on North Atlantic Express service, or AX1.

“The AX1 will considerably expand SCPA’s connectivity with the Northern Europe trade,” said SCPA president and CEO Jim Newsome. “The G6 has three other services on this trade in Charleston, and we look forward to serving as the only Southeast port of call for the AX1.”

All vessels in the service are post-Panamax in size, with 8,800 TEU capacity. To accommodate for the additional call in Charleston, Hapag-Lloyd also announced plans to deploy another vessel, the MV Osaka Express, on the AX1.

The addition of the AX1 marks 11 weekly vessel calls in Charleston representing 8 North Europe services. Charleston has a 64% share in the regions North Europe trade. Top commodities in this trade for SCPA include automotive and machinery, as well as export forest products.