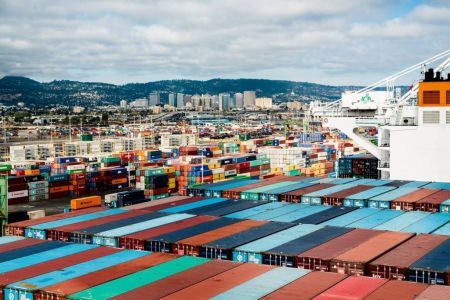 Drewry’s new report Container Terminal Capacity and Performance Benchmarks compares capacity and performance benchmarks for 500 terminals worldwide that help to explain some of the underlying factors hindering ports in North America, especially the ports on the U.S. west coast which are currently suffering from chronic congestion.

The congestion will eventually ease as steps are taken to address the issues, and U.S. ports will return to “normal”. However, this norm is still one that sees North American terminals under-perform the rest of the world in terms of the intensity of the use of the three key assets of container terminals – the quay line, gantry cranes and terminal land area, according to Drewry.  The average performance of North American terminals is well below both the world average and the best performing region average for all three metrics.

There are very significant reasons for the current congestion in U.S. ports, but underlying this it is clear that North American terminals do not make as intensive use of their infrastructure and equipment as elsewhere. If U.S. terminals could improve this position, then it would help to avoid or defer the onset of any future congestion problems.

The Drewry report shows that terminals with a significant proportion of transhipment perform better than those focused more on gateway traffic. U.S .terminals handle very little transhipment (a reflection of the relatively high handling costs in the U.S., themselves a consequence of high labour costs). In addition, the gateway traffic handled by U.S. terminals is mainly imports, and import traffic tends to have longer dwell times in the yard than exports, and more complicated handling requirements. It seems unlikely that U.S. terminals will markedly change their traffic mix in the foreseeable future, so this factor has to be regarded as immovable, says Drewry.

The typical terminal size in the U.S. is around 25% smaller than the world average, and the Drewry research shows that bigger terminals perform better than smaller ones in terms of intensity of asset use. Fragmentation of terminal capacity is therefore a very significant issue, especially on the US west coast.

Activity is spread across a number of smaller terminals rather than being concentrated in a few large ones, as is the case for example in large European ports like Rotterdam, Bremerhaven and Hamburg. This is an area where the U.S. ports can and (in some cases) already are seeking to take action and physically consolidate terminals through construction/reconstruction, according to the Drewry’s report.

The below average performance of North American ports is also a reflection of working hours. Elsewhere in the world, un-interrupted 24/7 working is more common, sometimes across all aspects of a terminal (landside and well as shipside), whereas in the US in particular, factors such as labour agreements and costs restrict the feasibility of this.

In this respect, Drewry thinks that terminal automation would help, as automated machines have no aversion to working unsociable hours and without breaks. Automation is something which is now picking up pace in the U.S. after a long hiatus since it was first introduced at the former APM Terminals facility in Virginia way back in 2007. However, it remains to be seen how effective the employers and unions are prepared to allow automation to be in practice.

Drewry believes that North American, and in particular U.S. container terminals, need to take steps to improve the intensity of infrastructure and equipment usage. This will require substantial investment and the cooperation of employers and the unions. The alternative is potentially huge macro-economic costs of further port congestion in future years.