Ebola Turns Up the Heat on West Africa Trade 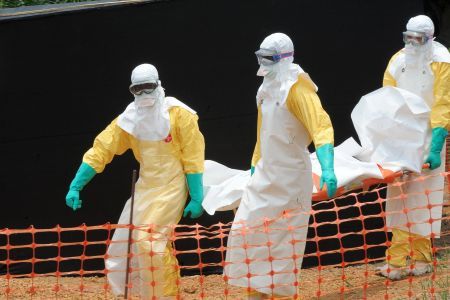 West Africa trade continues to acutely feel the pressure of the Ebola outbreak with export trade estimated to be down by as much as 30% since the start of the outbreak, UK’s shipping consultant Drewry said in its weekly container insight.

Capacity dipped 4.9% dip to 207,000 teu in October, albeit this is still up 31,000 teu since the start of the year. Meanwhile, utilisation on the Asia-West Africa fronthaul leg in September dropped 3 percent points month-on-month dragging freight rates down with it.

The estimated average all-in rate charged by forwarders for spot cargo from Asia to West Africa (Lagos) decreased 2% from USD 3,596/40ft in September to USD 3,541/40ft in October.

“While the Ebola outbreak is having an impact on current trade, carriers remain committed to long term development in West Africa, placing their faith in containment of the disease followed by a rapid re-establishment of double digit growth in traffic,” Drewry said.

The economic impact of this decline is anticipated to be significant, with the International Monetary Fund (IMF) reducing its growth projections for the region from 5.5% to 5%.

The World Bank also voiced its concerns and has similarly revised its growth estimates for Guinea, Liberia and Sierra Leone.

The decline puts the cost of the outbreak to the West African economy at USD 32 billion in 2015, if the disease is not successfully contained. Already, estimates show that the Liberian economy has declined by USD 113 million as a result of the outbreak; Sierra Leone by USD 95m; and Guinea by USD 120m.

Container traffic volumes illustrate the concerns with fronthaul volumes down 4,000 teu in September which, while up 5.4% year-on-year, fall short of the trade’s expected growth potential.

Southbound traffic continues to show an upward trend and year-on-year percentage changes that remain in excess of 5% despite the current crisis and this trend is what  keeps carriers resolutely committed to the region, Drewry explains.

Drewry cited MSC’s move to a hub and spoke set up in West Africa as proof of the longer term view carriers are taking of the Asia-West Africa trade.

“Just six months after its launch, MSC is revising its Africa Express service on the back of the planned development of a 2 million teu capacity terminal in Togo’s Lomé Container Terminal, being developed by subsidiary Terminal Investment Limited (TIL) and China Merchant Holdings International.

Commissioned in October, the terminal is expected to be fully completed by 2017. MSC is dropping its current West Africa calls in favour of one call at Lomé and utilising ten feeders to connect to Abidjan, Cotonou, Douala, Freetown, Lagos (TinCan), Libreville, Monrovia, Takoradi and Tema,” Drewry said.

In making the move, MSC will move up from the 4,100 teu ships currently used on the service to ten 6,000 teu ships from mid-November. The removal of the other West Africa ports will allow MSC to reduce the rotation from 11 to 10 weeks.

Maersk and CMA CGM still dominate the Asia-West Africa trade – accounting for over half of the available capacity – but MSC’s Lomé ambitions could challenge that position somewhat by 2017.

Lomé is proving a popular choice for a West African hub; Bolloré‐operated Togo Terminal’s 300,000 teu capacity is being expanded to 1.2m teu. Elsewhere, planned investments in existing ports in Abidjan, Tema and Pointe Noire and in the greenfield ports of CMA CGM’s Lekki and APM Terminal’s Badagry in Nigeria will further boost handling capabilities in West Africa.

Within 24 months ships of up to 9,000 teu could be a reality in this trade, Drewry estimates, adding that this move could be likened to the rapid growth in containership sizes serving the East Coast of South America since the start of the decade.

“Already a fifth of all containerships serving the Asia-West Africa trade are gearless, highlighting the evolution in shore-side handling facilities,” the weekly insight concludes.