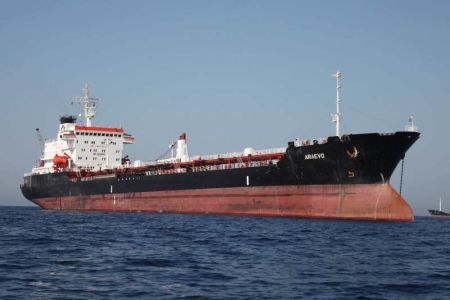 A Greek-owned tanker that was bombed by a Libyan military fighter plane January 4 while moored in the Port of Derna, is currently on its way to Greece, carrying the bodies of two crew members who died in the attack, IHS Maritime 360 reports.

A 29-year-old Greek and a Romanian crew member were killed, and two more were injured,  when the 28,610 DWT M/T Araevo, owned and operated by Aegean Shipping Management and chartered by Libya’s National Oil Corporation, was struck with two bombs.

At the time of the attack, the M/T Araevo was carrying 12,600 tons of oil, with a twenty-six person crew on board, three Greeks, twenty-one Filipinos and two Romanians.

The stricken tanker left Libya yesterday morning, and is expected in Greece today, travelling at a reduced speed under its own power, Aegean Shipping Management’s Elias Syrros told IHS Maritime.

The two injured crew members are in hospital in Derna, with one of them in a critical condition.